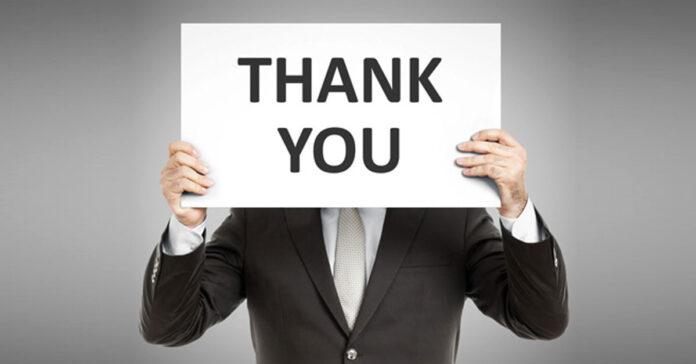 As an applicant, you invested a lot of time in your application, enduring at least two exciting interviews and in between an assessment center. And then, after a few weeks full of hope and anticipation, the job refusal flutters into the house. A letter or a short email and you will be informed in a factual and legally compliant manner that the position has been filled with another, more suitable candidate. If you don’t sink into self-pity and frustration right now, but instead see the established contact with your potential employer of choice and the knowledge and experience from the interviews as an opportunity, despite being rejected, you can gain a lot. Thank your interview partner with a letter of thanks and show your interest despite the job rejection.

Cheer up and let’s go!

Of course, each of us is disappointed when an application for an attractive position is unsuccessful and the position is filled with a “competitor”. We consider a rejection as a rejection, after all, another applicant was more suitable. Either because we don’t meet the professional requirements or because we couldn’t convince with our personality in the conversation. Or whatever. A deficit view that is quite normal at such a moment.

I could argue now that by gaining experience you learn from every interview and you keep improving. Or that many positions have to be advertised because of the works council and the internal recruitment had long been a done deal. So you had no chance from the start anyway. The question of “why” is human, but directed to yourself it is only conditionally beneficial. It brings many people even further down the spiral of frustration and can also lead you to lose more self-confidence for the next applications and to panic after a few months at the latest. “Nobody wants me.” “I will never get a job again.” “Everyone else is better.” This is not a good basis for showing greatness with a letter of thanks. And certainly not!

What can you do after a Job rejection?

Feel free to ask yourself why – but better constructive and future-oriented:

You can see that the point is not that you get angry about the past conversations or think up and down the famous subjunctive game “what if I had” in your mind. Hook on it! You cannot change the past, you can only learn from it for the future.

Yes, you read that right. Thank your interviewers for their time and interest in you. The letter of thanks after an application has been rejected is still very rare and offers you an excellent opportunity to show your professional side. You signal to the company that you were serious about your application, that you were very interested in this position and that you can also imagine other positions in the company.

Of course, this only makes sense if you really have a real interest in the company. And if you liked the company representatives during the conversation and you can well imagine working for this company. The thank you letter must be authentic and honest. This is not about sloppiness or the last word that you would like to have as a brave loser or victim of higher decisions.

A thank you letter will set you apart from the crowd. In the best case, it leads to your appreciation being perceived as such and you remain in positive memory.

Often it is the little things that are decisive for HR decision-makers and executives in deciding for or against a candidate in the last round. A rejection does not automatically mean that you are bad.

What should I put in a thank you letter after my job has been rejected?

Who are you writing to?

What are you writing?

I found some templates from the USA for these thank-you letters on the Internet. To my taste, they sound very curious and a little superficial, which culturally doesn’t surprise me. I think it is important for Germany that what you write actually corresponds to your feelings and thoughts. If you’re just writing a thank you letter out of frustration or as a last hope, then don’t do it. If you really care about a job in this company and you are convinced from your inner attitude that it is good to keep this contact, then explain this to the company.

Would you rather write or call?

Is it not a thank you letter, but a phone call? From my point of view, that depends on two factors: If the decision-maker or your last interviewee informs you over the phone that you will not get the job, then you can consider whether you will pick up the phone one or two days later and you or she call him to say the above. If you receive the rejection by post or email, it is advisable to respond to it in writing.

Second, I would also make it dependent on whether you a) find a phone call pleasant and feel that you can express what is important to you and b) how well you get on with the other party. If you know your interview partner to be very relaxed and close, a phone call can even have other advantages over a letter of thanks:

On the phone, both sides can react immediately to what has been said and a constructive conversation can develop. You can ask what was decisive for the decision against you and whether you can get tips on what you can change in the next interview. Companies are pretty much tied by law here, but maybe you have such a good rapport with the person you are talking to that he can give you a few reasons and tips for the next interview.

The reality check from coaching practice.

Does that also work? Does it make sense? Or do HR managers complain when you also receive letters of thanks in addition to a large number of applications?

I tested it – or better said, had it tested: Two of my clients who are currently in the application phase sent off a letter of thanks shortly after they were rejected. Even if the results are certainly not representative, they have impressed me and confirmed that thank-you letters are useful in certain situations.

In both cases – and previously the applicants were both in the last round after three interviews and had thus already established a closer relationship with the company – the feedback was extremely positive.

In case A, the HR manager contacted the applicant by phone after receiving the letter, thanked him for the letter and continued to show great interest in the applicant. You would like to keep the documents and add them to the pool of applicants and get in touch when another possible position is available.

In the second case, the potential supervisor reported – also by telephone – and stated that he had cast his vote for the candidate from a technical point of view, but had been overruled by HR and his own supervisor. Well, my client didn’t really want to hear that, but the feedback on the content was also very positive for him. He, too, remains in the back of the mind both in the specialist department and in HR for the next vacant positions.

Thank you letter after job rejection: useful or a waste of time? – My conclusion

A letter of thanks after a job has been rejected is particularly useful if you have come a long way in the selection process. The idea that every applicant sends a thank-you letter after the first round is pretty annoying from an HR perspective.

Applicants, on the other hand, who narrowly missed the new job in the company and who still have a real, personal interest in a position in this company, can call themselves back to positive memories with a thank you letter and perhaps something for more with constructive and personal feedback Learn job interviews. Important: Don’t let too much time pass by, write or call within a week.

A thank-you letter shouldn’t leave a trail of slime, because you don’t need that as an applicant at eye level. Write what is important to you and express what you would like to get rid of “in the end”. And maybe the question “Why not?” Will help you decide for or against a thank you letter.

I am interested in your experiences. As an applicant, have you ever sent a thank you letter after a rejection? And if you work in the HR department, what do you think of thank you letters and how do you deal with them? I look forward to your comments or personal messages.

How Can Internet of Things (#IoT) Transform Businesses?

Author Amardeep Kaushal - April 26, 2020 0
"Why do you want to change jobs?" Applicants have to answer this question at least in the interview at the latest. The question...